In this area supraorbital and supratrochlear nerves pass through the frowning muscles and can be compressed by them, occasionally supraorbital nerve passes through a narrow bone tunnel which can act as trigger point. Migraine surgery is done by removing frowning muscles and replacing them by fat to prevent depression in this area, identical surgery is done for cosmetic purposes to eliminate the frowning lines. Surgery can be done with minimally invasive techniques (endoscopically) using few 1 cm hairline incisions or by direct upper eyelid incision. This surgery usually takes about 1-2h based on technique used. Please see following illustration and explanations to familiarize yourself with the incision and technique. 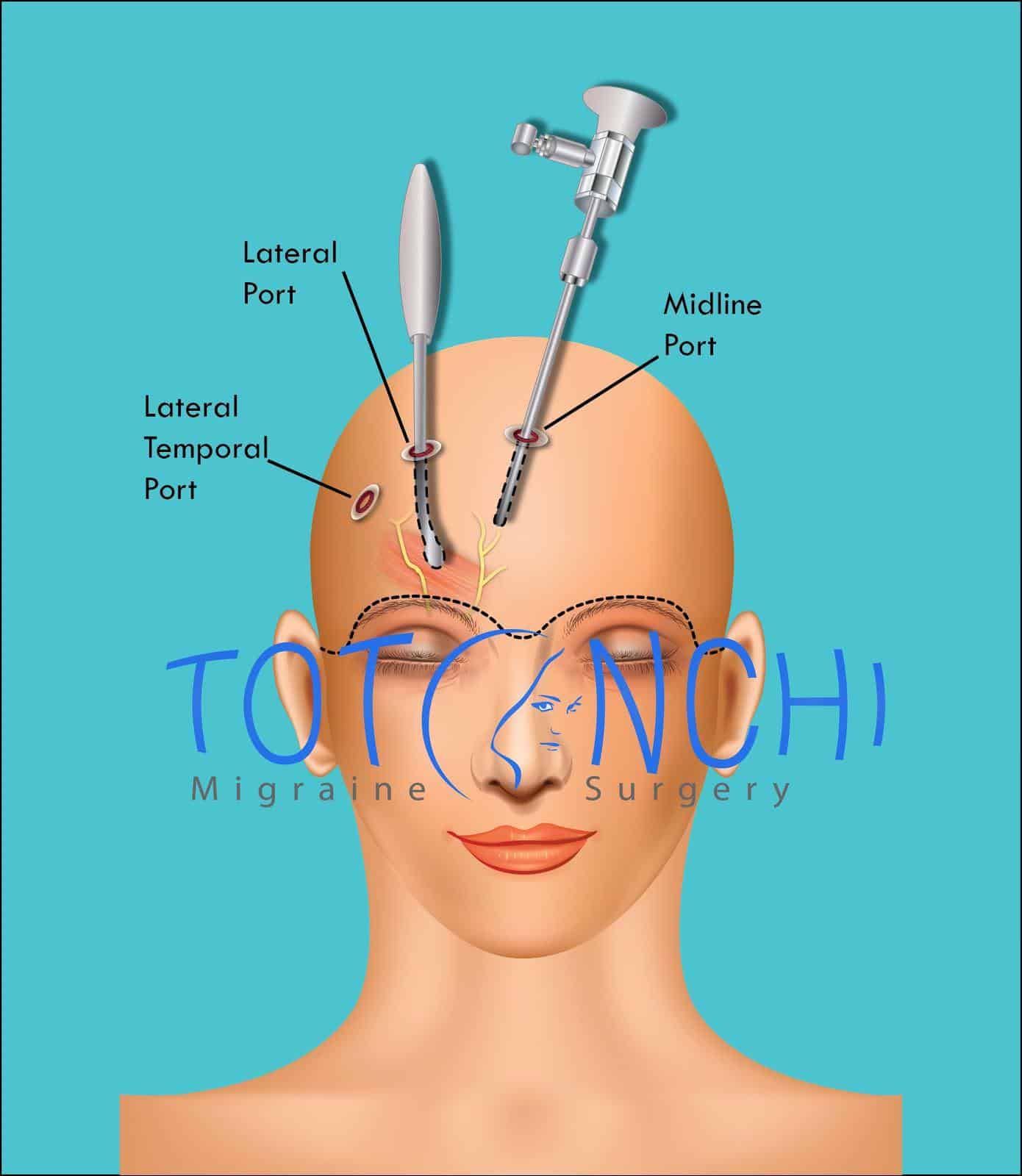 Endoscopic access for frontal trigger point is the most common access in our practice, it is done by few small incisions in the hairline so after surgery scar is hard to notice since it is hided inside the hair bearing area 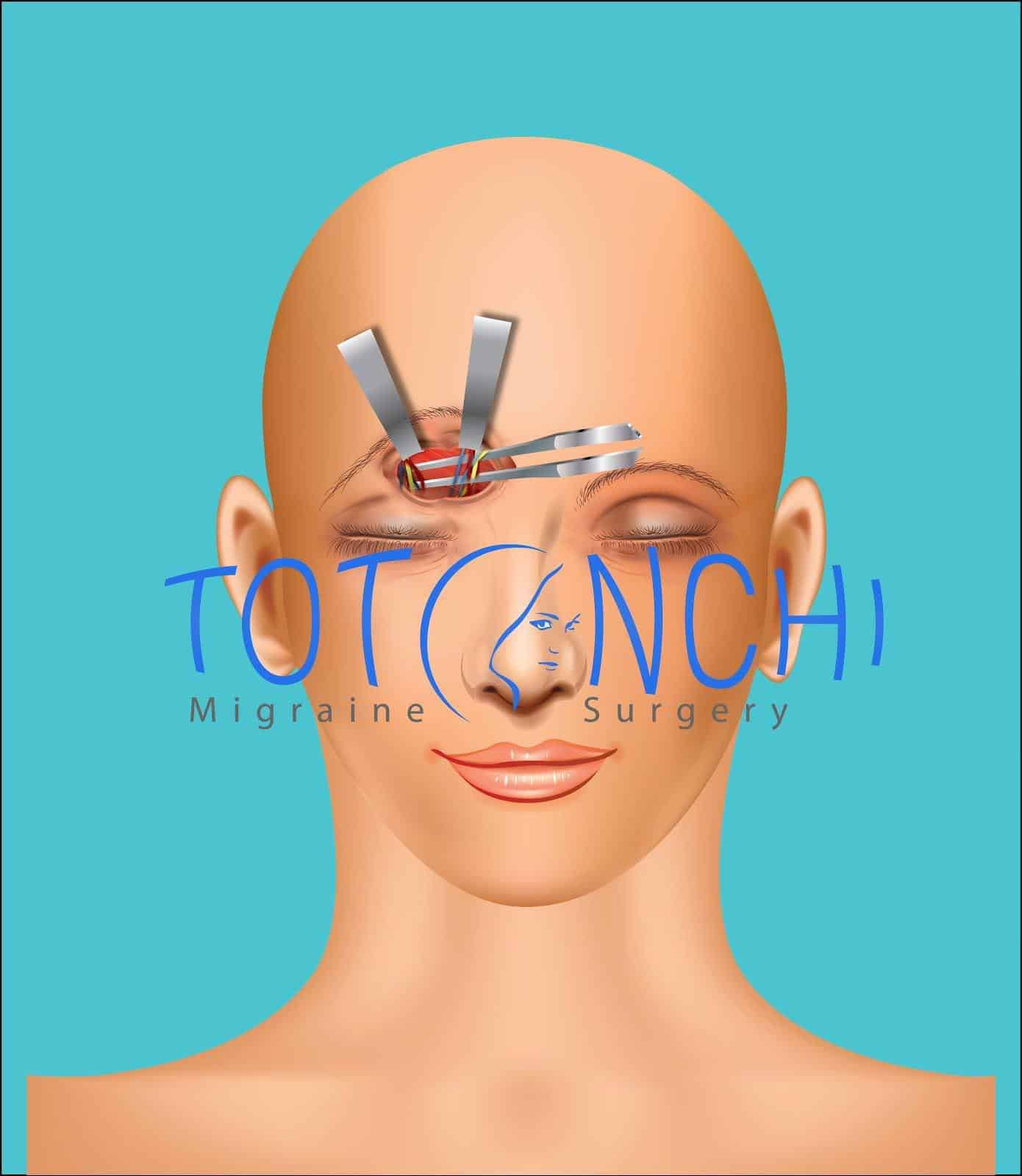 In patient with long forehead open approach for frontal trigger point is preferred, incision is made in the upper eyelid fold, since the scar falls in the fold after surgery scar fades nicely and it it hard to notice, upper blepharoplasty can be added to this technique easily. 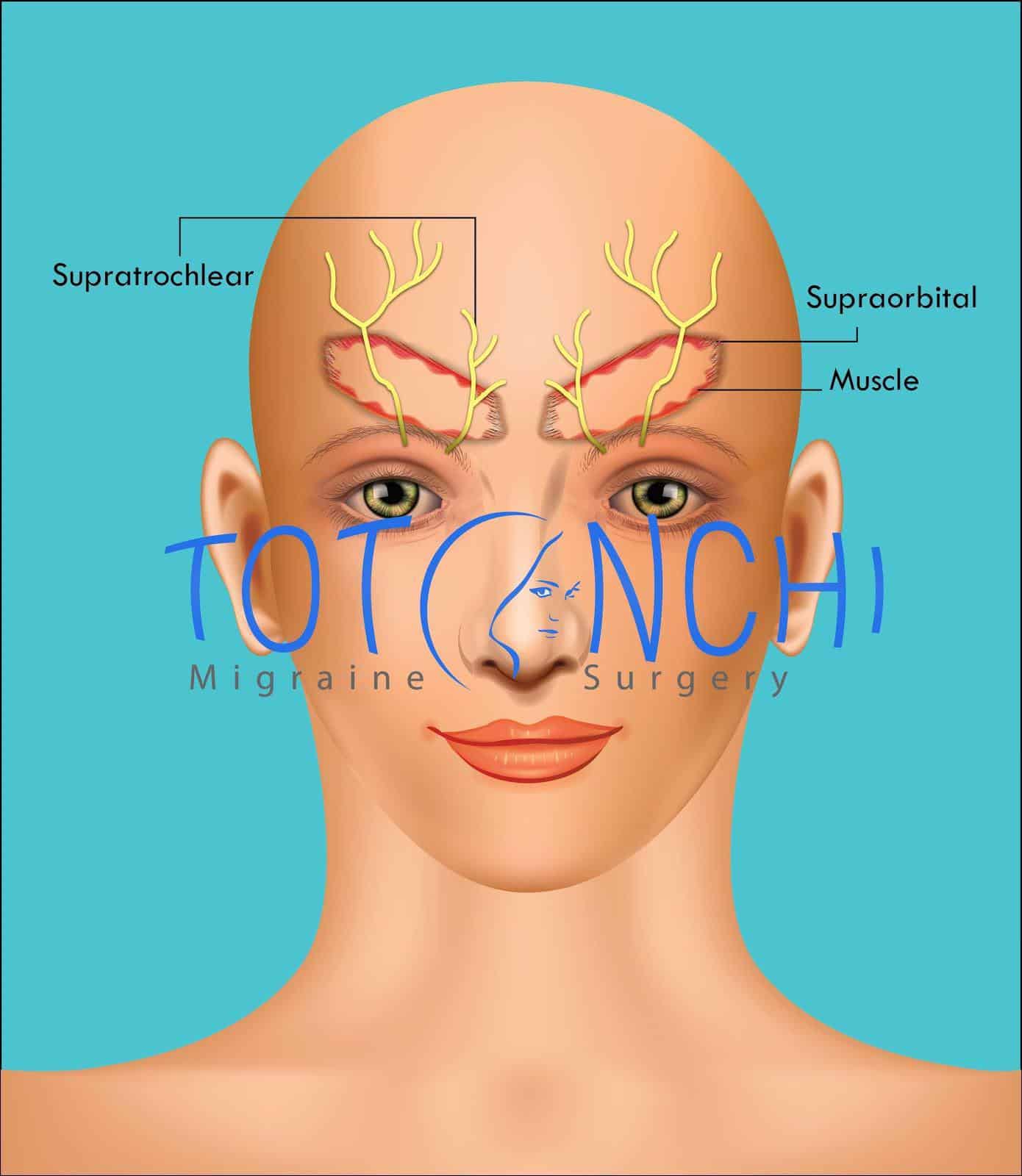 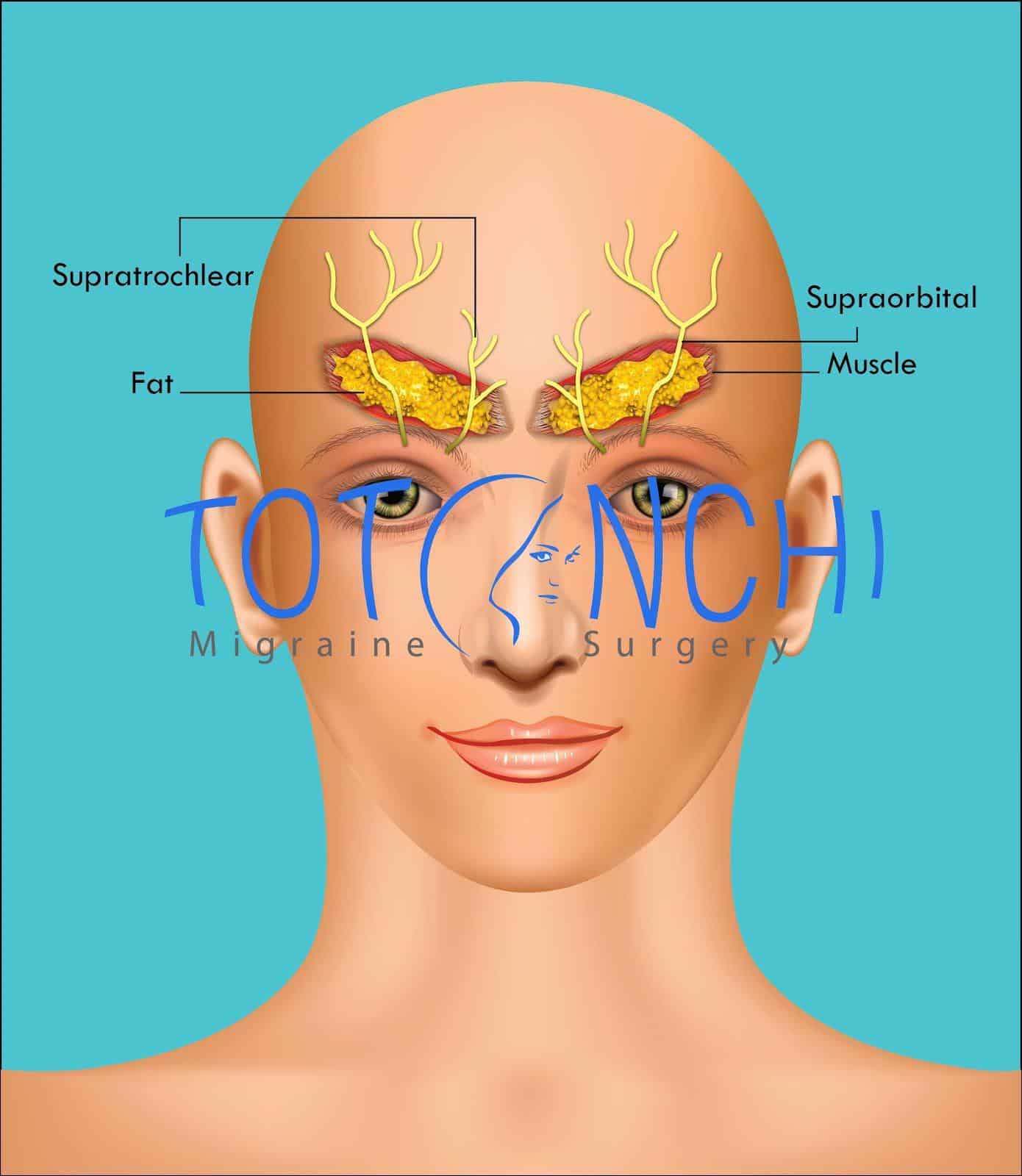 In both endoscopic and open techniques the goal is to remove the pressure from the nerves by removing the muscle and adding fatty tissue to the area as it is shown in the 2 above illustrations, this technique is routinely used in patients who are undergoing forehead lift so it can improve or eliminate the 11 lines in the forehead area 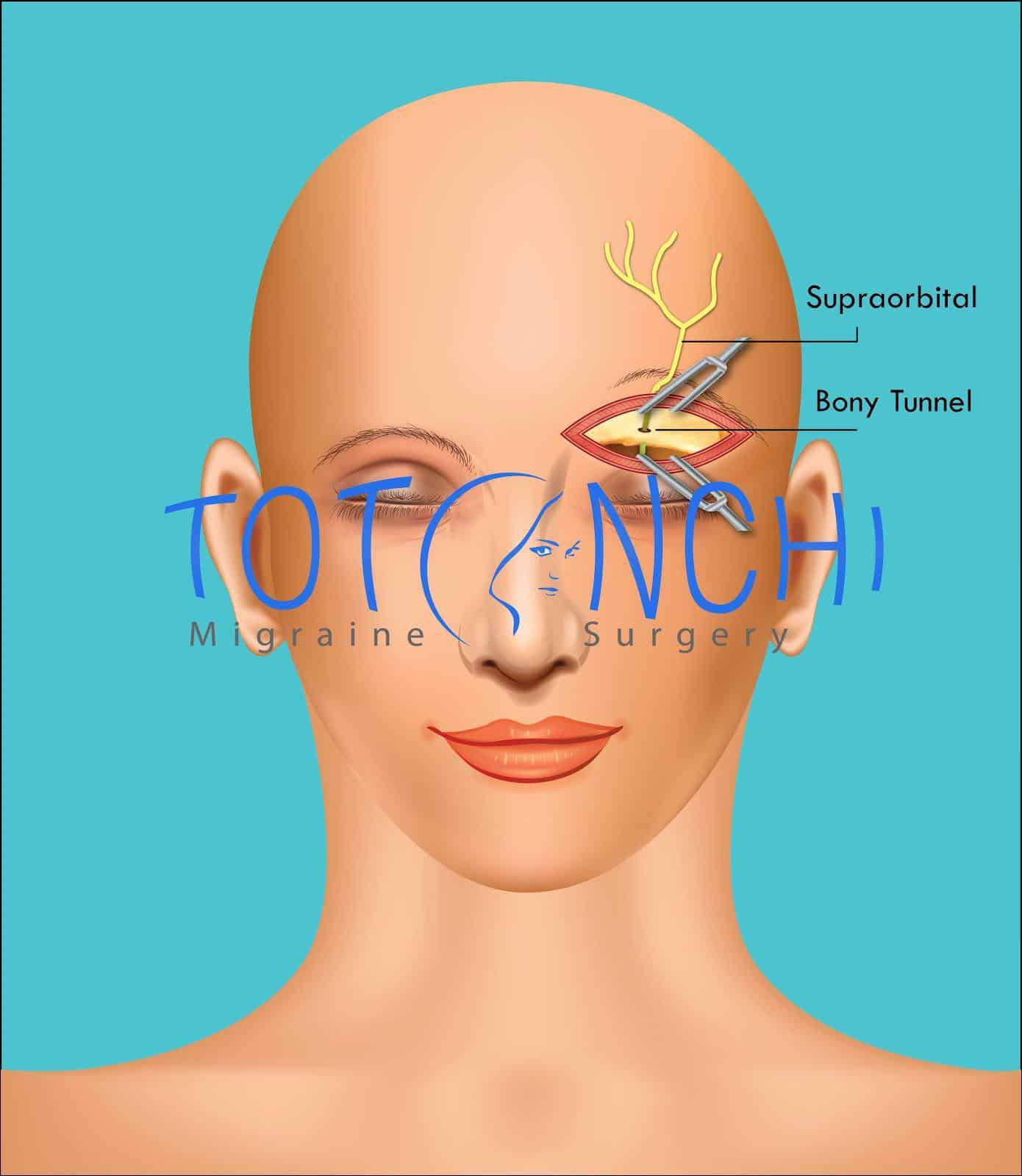 In some of the patient nerve is compressed by passing through a narrow bony tunnel or under a tight band, it has been shown the releasing this pressure point can improve the response rate, this can be done endoscopically or by open technique